Retro for Kids | THE GIRL AND THE ECHO 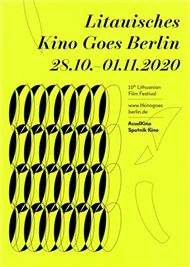 Retro for Kids | THE GIRL AND THE ECHO

Litauisches Kino Goes Berlin was founded in 2011 with the idea and ambition to present the wide range of Lithuanian cinema in Berlin. Since then, the only Lithuanian film festival outside of its home country has developed into a platform that gives film enthusiast and culturati an understanding of the cinematic art and culture of Lithuania all year around.
The festival also celebrates its close connection to the other Baltic States, Estonia and Latvia, by including films from these countries into the festival program.

With the festival in November as its central event, Litauisches Kino Goes Berlin presents feature-length and short films of all genres, made by filmmakers from Lithuania and the other Baltic States. A side program of concerts, exhibitions and workshops tops the festival off. Thus, Litauisches Kino Goes Berlin sees itself not only as a mediator of a holistic image of Lithuanian cinema in the European context, but also wants to create an awareness of Lithuanian culture by including artists of other disciplines.

Recent, award-winning feature-length films by renowned directors are presented in the FESTIVAL PEARLS program, while the festival’s RETROSPECTIVE features significant classics of Lithuanian film history that rarely find their way onto the big screen in Germany or are available in any other form.

Several short film programs show the latest productions of established directors and promising talents. Since 2015, films in the SHORT FILM COMPETITION can receive an Audience Award for Best Short Film. In the BALTIC SHORTS programs, the audience also has the opportunity to experience the best of all three Baltic States on the big screen.

Litauisches Kino Goes Berlin is organized and curated by Berlin-based Lithuanian Giedrė Simanauskaitė. She has gained experience at numerous film festivals in both Lithuania and Germany (e.g. at the Vilnius International Film Festival Kino Pavasaris and at the FilmFestival Cottbus – Festival of Eastern European Cinema).

Litauisches Kino Goes Berlin is sponsored by the Ministry of Culture of the Republic of Lithuania and the Lithuanian Council for Culture. It is implemented with the support of and partially financed by the program Global Lithuania.