Videographic Criticism: Aesthetics and Methods of the Video Essay 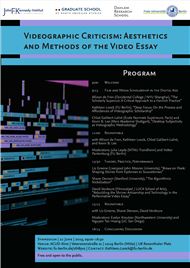 This one-day symposium is dedicated to videographic criticism – a digital method that uses the materiality of film and media to produce audiovisual analyses, commentaries, and scholarship.

It brings together practitioners, curators, scholars, and teachers to present their recent videographic work and to exchange ideas about their individual approaches to videographic criticism and their preferred aesthetics and methods for producing video essays.
The participants will also discuss the potential of the video essay for critically engaging with and studying film and media texts as well as its promises for scholarship, teaching, and forms of public engagement.

Free and open to the public.