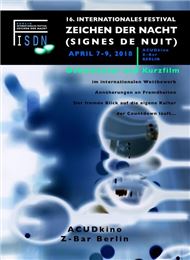 A community of electrically sensitive people is fleeing to a remote mountainous region of West Virginia called the National Radio Quiet Zone. In the shadow of one of the world’s largest and most sensitive radio telescopes, The Quiet Zone follows four characters as they adapt to life in this unique environment.
The film draws a subtle parallel between the telescope and the electro-sensitive community, reflecting our growing concerns and ambivalence about the relentless permeation of communications technology.
---> Deutsche Premiere

We call those who suffer from the melancholy of eternity, eternals.Convinced that death cannot triumph over their lives, they believe thatthey are doomed to wander in anticipation of the day when they will befreed from their existence.This film is a story of wandering and fleeing, on the borders of Nagorno-Karabakh, an Armenian
enclave in Azerbaijan...